I’ve only briefly read Andy Brown before, but he’s supervising one of my closest friend’s PhD, and he raves about him, so I went into this selection of his poetry with a sense of expectation. The first piece, ‘The Last Geese’, is beautifully descriptive, pleasingly rigid in its form, a sense of clarity and successful mimesis (well, as successful as mimesis can be). It is chopped down and honed, impressive and unflashy, entirely succinct. As such, on the odd occasion his imagery gets a bit more whimsical (“geese the size of the wind”) it doesn’t quite work. Nor does the conclusion: it stretches for an enigmatic, imagistic ending: “the unseen echoing back”. In a poem all about the seen. The problem with it is the contrast, the sense of change the poem seems to be trying to convey, both underestimates and overestimates what came before. The seen is documented meticulously, mimetically, as if it needs to be clung to, to keep; the geese leave “through the pink keyhole of the horizon”. I guess in dropping in “the unseen” it draws too much attention to what the poem wants to achieve, not letting it simply convey what it arguably already has. Or maybe it’s just that ‘the unseen’ is such a prevalent force in American philosophically-tinged poetry at the moment, sometimes for the better, sometimes for worse. Nonetheless, it’s very good. Probably, for me, the best-written poem I’ve read in here so far. And of course, one could read plenty into this subversively ‘surface-based’ poem.

‘A Poem of Gifts’ is very, very good. Although no-one has managed to write this sort of thing better than Tim Lilburn, for me at least. Most poets probably won’t. In fact, this is why I probably won’t go on commenting on Brown: he’s just not Lilburn, but is similar enough in style and content to be immediately associable with him. Most assured poet in here thus far, though, I think, and definitely worth reading. I’m not sure why I so infrequently hear about his work? Same as with Burnside, I guess, with whom Brown has collaborated in the past.


Judy Brown’s lyrics are compelling, their narratives asserting their originality completely naturally and without showmanship in their apt and striking descriptions (skin “smooth as Greek cheese”, “power chords/of police helicopters”, both from ‘Peckham Poem(s)’) and the personality of her poetic voice. None of the pieces are exceptional in their subject matter, but the quality of her phrasing, which renders familiar themes new, and the power of her observation:

‘Are you a local girl, the man asks.
Yes, I am, I say, hoping to prove it
With my pound coin, which he palms,
His eyes already travelling on.'

make her a writer worth reading.


Yawn. More of it! Bryce’s ‘The Smoke’ is a faultless piece of writing, a lovely, neatly and sparsely constructed lyric. But so what? What is it doing to stand out? I’ve read hundreds of British lovely neat sparse lyrics and I’m sick of them. I want something big, something that stands out, something that can match the innovation of the American poetry of the last 20 or so years. We have Pyrnne and Denise Riley, but they’re barely ever mentioned. And of course Muldoon. There seems to be a collective lack, or a collective provinciality in ambition in a lot of the contemporary UK poets I read. Either that or just polite rip off of Yank post-Language poetry.

Okay, back to Collette. Or not. I have nothing to say, really. Finely crafted, has the potential for mainstream appeal. Entirely bland. (I apologise to Collette Bryce for ranting and not actually commenting on the poetry properly. I’m sure it’s not really as uninteresting as I’m making out to be.)


Looks alarmingly like Johnny Rotten. First poem ‘Acupuncture’ is good, very funny, reminiscent of the stuff everyone seemed to want to write after ‘The Harbour Beyond the Movie’ came out (but not boring and derivative) and the New York stuff we all like to try not to write too much of. I’d like it more if it didn’t remind me so much of Hughes’s ‘Bride and Groom Lay Hidden for Three Days’. The problem I have with his poetry, actually, having read over it quite a few times, is simply that its absurdism is so standard and predictable and the writing is full of dropped names. The former is fine, in that at least it’s nice to read; the latter is the killer: it spoils the musicality of his poetry, bogging it down with obscure and arguably self-indulgent textual referencing and postmodern trickery.


While perfectly adequate, her first poem, ‘Almost in Sight’, doesn’t transcend its being another straight lyric about the speaker being a child, despite its political under/overtones. Yep. That’s really all I have to say.

I saw Capildeo read once and it was an uncomfortable experience. She didn’t seem to keen to be on stage, and I could barely catch a word of what was being said. Her first poem is called ‘Lilies’. Great, I thought. A female poet writing about flowers. And how pleasantly happily presumptuously wrong I was. Capildeo is pretty fucking good. Her opening piece is riddled with scent, concepts and ideas conveyed in smell, in “Vaginal cyprine”, the poem a “claw-shape of undersea diction”. The rest of her poems don’t fare so well, for me, but they are at least inventive in their language, and bold in their vague narratives of time, place and senses, the three intermingling into cogent lyric.


Mmmm. Challenger is good. She seems keen to capture things – a whale, a photograph – with an impressively reshaping phenomenological vigour, transforming the act of viewing an inanimate, once animate thing into an act of descriptive, philosophic meditation. “O that I might love my unbeautying.” Occasionally her desire to depict it new leads to overwritten or overwrought phrasing, but this is, for me, entirely justified by the stretching of her images towards something newly represented, even if they sometimes don’t hit their mark.

“Why can’t flesh give the lie/To immunity?”
Posted by Joshua Jones at 06:58 No comments:

A History of Piracy* in the Park


the pirate cut his throat
and from that deep sea of 1930s romance
she arose headlong with sleepiness
with the gentle filmy wonder of a wife
Mrs. Irene Gosse
in sincere dedication to -
all this myriad adventure -
the park empty
she gathered her shoes
stretched her arms like oars
stood up from the trunk
the dry long-wrecked hull
she had rested against
and turned with all the silent reverence
of a sail

*A History of Piracy, Phillip Gosse


‘it is time the stone grew accustomed to blooming’ - Paul Celan, Corona

No word from the neighbours. One house
Gutted, the other audible at ear-height through the mirror.
Children scream in the morning, nothing wakes me.

At an acute distance, birds can be seen flocking -
Gathered to a solitary leader at their apex.

Love, I opened the box in my dream.
Gold rushed from me like Midas cashing his cheque
In the river: it’s over, the world has begun.

A great breath of glass at daybreak,
The sky half-shaken to wine.
The window weeping at the boundary of warmth.

beams down,
one bright shaft, softens
what is struck or breaking
in a slip of wine, given―

when you
come home with a strange rawness, ashamed
but not sorry, body quivering
from the hot darkness that took it,
and look at me blankly
as if I should blame instead
something dwindling in the sky.


The black gate tolerates the key.
The light grows frail and wild.

You leave, the curtains part clumsily
and will not close again.

No great path: daylight, a window. 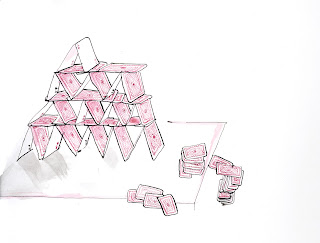 Charlotte Hoare grew up in the small village of Potterne in Wiltshire.  Not much happened there apart from words, and they didn’t happen that often.  There was a nice context of silence.  She moved to Norwich in 2007 to study Literature with Creative Writing, with the idea that she was the only person in the world that wrote poetry.   Luckily this insular world fell apart quite quickly.  She has recently qualified as an English Language teacher and will hopefully start work in Prague soon.  She plans to keep creating worlds that fall apart. She has a poem coming out in the S/S/Y/K (4) anthology soon.

Natalie Orme is a freelance illustrator, co-editor of Etcetera and recent NUCA graduate. Her work has been exhibited in various places in Norwich and London, and includes drawing, printmaking and lots of other non-digital design. She is currently working on expanding her portfolio, highlights of which you can see on her blog. Most recently she designed covers for Joshua Jones's debut collection, Thought Disorder, and King Laconic's first EP, Muddy Snow.
Posted by Joshua Jones at 11:06 No comments:


I measured longing
It passed between two points
and was long / Beginning
'HERE' where the weather is
Always (Mainly
Extending out before me like
a road (A long one
Longing lasts two hours and
forty minutes / I timed it
Alone / To that point
'THERE' where 30 quid means
Alone won't last as long
Just a carriage length
- which, really, is nothing
--

Richard Barrett lives and works in Salford. His first full length collection, Sidings, is forthcoming from White Leaf Press. He is a co-organizer of the Manchester based performance series Counting Backwards.
Posted by Joshua Jones at 04:58 No comments: